Farmer Ted’s Golden Ale is an indigenous American beer style created as an answer to post-prohibition German lagers. We pay tribute to the beers made on early, rustic systems by using natural ingredients like corn and barley to create a smooth and full-bodied, straw-colored ale. Reward yourself with a Farmer Ted’s after a long day plowing the fields, or just after mowing the lawn!

A crisp and refreshing beer that finishes with a hint of sweetness. Corn is added to the mash to create the creamy mouth feel for which this style is known.

Note:  We started canning Catawba beers in 2012, and Farmer Ted’s was included in the original lineup alongside White Zombie and Firewater IPA. The label art was eventually redesigned in 2014, 2017, and 2019. As part of our “Discover Burke” celebration, we’re now offering a commemorative 16oz Ted’s 4-pack that includes each of the four historical label designs. Available for a limited time. 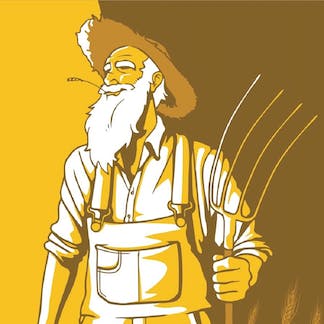